Blessed Being, freedom is your choice flowing into your life. As you balance what you create with the co-creation of others, you discover the boundaries of your freedom. This is based on the conditions of the physical world. It is based on your perceptions of possibility and the resonance of your vibration with your desires.

The conditions of the physical world indicate separation. Indeed, it is part of the functionality and form of the Earth experience. As you observe and accept the conditions around you, you soothe your vibration into connection—technically into resonance, for connection is an invisible truth that is constant, though not initially obvious.

At this time, you are learning the rules of the law of resonance in great detail.

This requires that you apply it into your life and observe the response and information flow that you are receiving. Are you feeling differently? Do you notice flow or stagnation? Is it a time of rest, action, focus, or play? Life will call you to interaction continuously, but it looks different in each moment.

It is this acceptance of the physical separation that allows you to find the invisible connection with others that are so unlike you.

It gives you the strength to hold your Love in the midst of fear, anger, or chaos around you. It gives you the fortitude and patience (peace in action) to allow form its time to ripen. It gives you the knowing of who you are within the collective of humanity, and to reflect that Love to those that have not yet heard the whisper within. 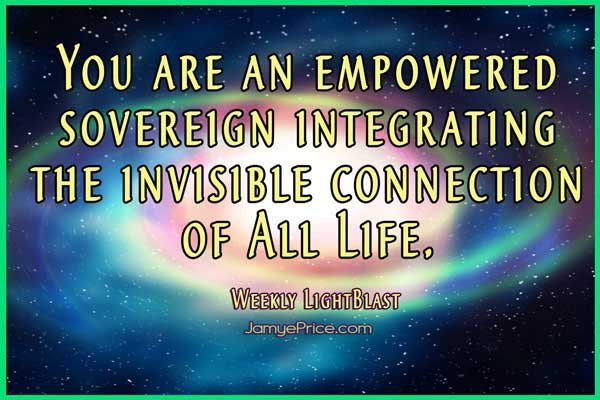 In essence, you are becoming a connected one, an empowered sovereign that understands the functionality of separation on Earth, and integrates the invisible connection of All Life. You are allowing the Will of Love to create a new humanity, instead of the separation that creates fear and domination. You are a force of change that is passive in nature, but powerful in its core. But it is invisible. To embody this empowerment, you can not rely on circumstance changing to feel satisfaction.

As we sit to Blast Being One, we are maintaining a powerful flow of Love, as we observe life on Earth and see the potential of Love within each being. We are understanding the value of separation as it creates a call to connection that fulfills as it grows. We are aligning our internal resonance with our outer desires, magnetizing synchronicity with those of like heart. We are patient, powerful, and boldly Loving; allowing the fear of humanity to discover its strength within. We are connected to the potential of Love, for we have already discovered it within and are emanating it out consciously, unabashedly, and eternally. Blast on!

Here is a little of what we have been doing. I was granted a beautiful vision of Guan Yin bathed in the violet flame in a crystal pagoda temple when we visited her sacred tree temple as below…Tuesday June 22nd

The white Lotus in Buddhism is associated with the state of bodhi, of becoming awakened to the wonders of All. The ONE in ALL.

(A Blue Lotus represents surrender of the ‘self’. The Pink Lotus is the enlightenment of the Buddha)

The white lotus flower in Hinduism is associated with the naval of Vishnu. Brahma sits on top of the Lotus and from there He carries out the order of Vishnu to create the world.

The third day we visited a Guan Yin shrine called the Temple of Eternal Happiness with the miracle Ginkgo Tree. For centuries women have come to this site seeking help and blessings from Divine Mother in the form of Guan Yin (Kannon-sama/Kannon-Bodhisattva in Japan) and there are numerous documented accounts of miracles here in the form of childbirth, healing and rejuvenation to do with breasts and fertility because of the shape of the tree and the potency of its sap when made into an elixir. The tree has the formation of Guan Yin’s breasts and the feminine healing energy here is certainly profound. There are many legends where the tree actually gave milk to human babies to help them survive.

Ginkgo is an absolutely fascinating herb, magically speaking. For one, it is the only tree on the planet that has survived basically unchanged, for more than 200 million years, since the dinosaur age. For another, it’s not too much of a stretch to look at the leaf shape and see one half of the hemisphere of the human brain. Indeed, the ancients saw this correlation and as a result, the leaf has been used as a brain food for centuries, both in medicine and in magic. Lastly, it is a tree that can survive for 1,000 years or more, making it a true “Tree of Life.”

Due to its age, Ginkgo is considered an elder with high magical energy, and is used in longevity and age spells. A tradition is to plant a Ginkgo on the occasion of births to ensure long life, and in death to ensure longevity in the peaceful afterworld.

Ginkgo is also considered an aphrodisiac and fertility herb, and can be used in love and fertility spells to these ends. Indeed, Ginkgo seeds are sometimes substituted for Lotus seeds at weddings due to this property. One legend has it that if a girl sits under a male Ginkgo tree on a moonlit night, combs her hair and makes a wish, her wish will come true.

Wood from Ginkgo trees can be carried for healing, and the leaf can be used in healing rituals. Also try a tea for healing and for mental acuity before an examination or important business dealing.

Monk sitting under a Ginkgo Tree

I am Altair, Son Of Lord Krishna, Son Of Lady Guan Yin, conscious walk-in from the Pleiadian Dolphin Isle Daenkus.

Altair is a teacher, healer and mystic guiding the Way of Love, Unity and Harmony for the New Gaia that we are co-creating. He teaches that We are the Way and that our freedom to be our True Self is the key to transformation. “The miracles of God lie within Us. We are the Light. We are the Temple of the One Chakra whose Awakened Infinite Light Body brings all our dreams into reality.” With deepest Love and Devotion to My Divine Mother, Lady of the Earth, Guan Yin (from the Sanskrit root Guanyin/Kuan Yin/Kwan Yin) “The Divine Mother who perceives the Sounds and Cries of Mother Gaia and Her Children.