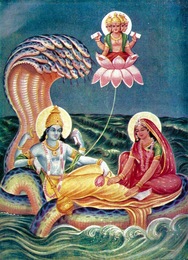 Brahma, the Creator, emerging from the navel of Vishnu

Steve: Narendra and I differ on our use of the term “Transcendental,” but the difference is in words, not realities. All opinions are welcome here.

What is the Transcendent Reality? – Part 2/2

As spiritual writer and researcher Steve Beckow has noted, the terrestrial sages of the past did not have the vocabulary needed to explain in any detail the notion of the transcendent reality. We are fortunate in these times to have with us a scientific vocabulary to use to describe the transcendent reality. This comes from quantum physics in general, and string theory in particular.

Bhagavad Gita speaks of the transcendental reality as follows:

Here the term ‘unmanifested’ refers to the transcendent reality. By and large, the discussion in the past was limited to either manifested (immanent) or unmanifested (transcendent).

Now however, that has changed. We now have the concept of various dimensions of reality. Students of mathematics will be familiar with the three-dimensional concept of space for instance.

More than just the scientific facts and figures, living at a time of transition away from the dark age of the Kali Yuga, we now have access to extra-dimensional sources who can clarify and instruct us on this topic.

As reported by Steve, one such source, Archangel Michael, states that we live in a 12-dimensional universe. Each dimension has various sub-dimensions.

​Different sources give different numbers for these dimensions, but this inconsistency is easily resolved by the recognition that there are no hard and fast markers to the dimensions. Each flows into the other.

Therefore, one source might merge the qualities and characteristics (or frequencies) of one dimension within another, whereas another source may see it fit to separate them. The important point to note is that there are more dimensions to the three that we live in.

​Where then in this context of dimensions does the transcendental fit in? In the Law of One, Ra offers a clue as follows:

Ra: I am Ra. This is correct. The higher self is of a certain advancement within sixth density going into the seventh. After the seventh has been well entered the mind/body/spirit complex becomes so totally a mind/body/spirit complex totality that it begins to gather spiritual mass and approach the octave density. Thus the looking backwards is finished at that point.

To truly appreciate Ra’s response we must bear in mind that we are in fact spiritual Beings having a human experience. We all have a Higher Self that is based in the sixth dimension. This Higher Self reaches back to assist us in the third dimension before itself moving on to the seventh.

We can therefore infer from Ra’s response that the phrase ‘gather spiritual mass’ may also mean lose physical mass. Therefore physical manifestation may cease from the seventh or eight dimension. This is just my interpretation and I am subject to correction. Note that while there is a subtle difference between densities and dimensions as used by Ra, we use the terms interchangeably here.

​To conclude this discussion we can summarize the points that we’ve covered in this article. The transcendent reality is an unmanifested reality. It contains parallel universes, possibly in potential rather than manifestation. Our manifest reality emerges from the transcendent as one of these potential universes. Both the manifest and transcendent creation can be divided into different dimensions or densities according to frequency, or attributes.

2 thoughts on “What is the Transcendent Reality? – Part 2/2 – Narendra Mishra”