In Part 1 of this article, we looked at the first source of our knowledge of planetary ascension- that of the modern sages and scholars. In this article we will look at the second source of our information, entities that are not of this world.
Communication with other-worldly sources is by no means normal for most people. In fact, such communications may in many instances be associated with abnormal mental health. However, as psychology professor Jon Klimo has indicated, there are some instances of other-worldly communication that cannot be explained away as mental health issues. (1)

These instances may be classed as a phenomena called channelling. In his authoritative textbook, Klimo has defined this strange phenomena as follows:

“Channeling is the communication of information to or through a physically embodied human being from a source that is said to exist on some other level of dimension or reality as we know it, and is not from the normal mind (or self) of the channel.” (2)

There are some important points in his definition that I examined in another article. For our purposes we will only look at one here- the fact that the interaction involves a source that exists on some other level of dimension or reality as we know it.

These sources I term ‘other-worldly’ and in this category Klimo includes both physical extra-terrestrial entities, as well as non-physical, spiritual entities.

According to Klimo’s definition several of the world’s major religious scriptures contain channeled information. The receiving of the Ten Commandments by Moses constitutes a channeling experience. Likewise, the interaction between Prophet Muhammad and the angel Gabriel is also a channeling experience. The primary scriptures of the Hindus, the Vedas are also called Srutis- referring to the receiving of channeled information by the saints and sages of India.

Regarding planetary ascension, one such other-worldly source, Archangel Michael through Ronna Vezane, tells us of the planetary age that we are now entering,

“Know this, my brave ones, you are in the final stages of a specific unit of time, and you all have been subjected to a unique system of rules. We are repeating and emphasizing this information, for it is vitally important that you understand this concept within the new Universal Laws of the Age of Aquarius.”

Another otherworldly source, Matthew who speaks from the afterlife, said in 2012,

“It is Earth’s destiny to leave third density [ascend] when a universal cycle opens an astral window at the end of this year, and by then no one with a dark mind and heart will be left on the planet.”

As we have seen in Part 1 of this article, the end of 2012 was an important date encoded in the long-count calendar of the ancient Mayans.

Yet another otherworldly source is Ra whose civilisation is claimed to have developed in Venus around 2.6 billion years ago.* Ra was channeled in the 1981 by Carla Rueckert during full trance channeling sessions, and questioned by physicist Don Elkins. During the first session, Ra was asked of their purpose in establishing communications with the group and responded thus,

“We are old upon your planet and have served with varying degrees of success in transmitting the Law of One, of Unity, of Singleness to your peoples. We have walked your earth. We have seen the faces of your peoples. This is not so with many of the entities of the [Galactic] Confederation. We found it was not efficacious. However, we then felt the great responsibility of staying in the capacity of removing the distortions and powers that had been given to the Law of One. We will continue in this until your, shall we say, cycle is appropriately ended. If not this one, then the next. We are not a part of time and, thus, are able to be with you in any of your times.” [Note: my emphasis in bold]

In another session Ra gave an estimation of when the present cycle will terminate- approximately 30 years from 1981- a figure that works to be around 2012.

“6. 16 Questioner: What is the position of this planet with respect to progression of the cycle at this time?
Ra: I am Ra. This sphere is at this time in fourth-dimension vibration. Its material is quite confused due to the society memory complexes embedded in its consciousness. It has not made an easy transition to the vibrations which beckon. Therefore, it will be fetched with some inconvenience.

6.17 Questioner: Is this inconvenience imminent within a few years?
Ra: I am Ra. This inconvenience, or disharmonious vibratory complex, has begun several of your years in the past. It shall continue unabated for a period of approximately three oh, thirty [30], of your years.

6.18 Questioner: After this thirty-year period I am assuming we will be a fourth-dimension or fourth-density planet. Is this correct?
Ra: I am Ra. This is so.”

This last statement meshes perfectly with that made by Matthew earlier in this article. At the end of this cycle, earth leaves the third density and enters the fourth density.

There are many more credible channels who tell us from their sources that the planetary cycle is at a crucial stage, and we are entering into a new age at this time period. This section of this article has simply aimed to provide a small cross-sample of such information.

In conclusion, I have sought in this article to provide evidence of Ascension from two distinct sources- terrestrial saints and scholars, and other-worldly sources derived from channeling. This information is not covered by the mainstream media (for various reasons) but there exists a wealth of credible and authenticated information available for the interested reader to explore. I hope that this article will catalyse such research.
Footnotes
* Very recently it has been suggested by scientists that Venus may have once harboured life. See for example this 2019 article from Live Science that suggests Venus may have had vast oceans and harboured life around 3 billion years ago.

Gratitude to all artists. Any queries, please contact me, Shekinah Ascension is Self-Realisation or God-Realisation. It is termed ‘ascension’ because the soul ascends from manhood to Godhood. It results in the freedom or liberation of the individual soul from the cycle of birth and death called reincarnation.

For many centuries, the striving for ascension has been an intensely personal one. The aspirant would usually join a monastic order, or retire in caves, mountains, forests, or other secluded areas to dedicate his/her entire life to its pursuit.

This time however, ascension is different. Now the Earth Herself, as a living conscious being with a planetary body, is ascending and taking all Her inhabitants with her. Almost all incarnated souls on earth, including humans, animals, plants, and minerals now have the opportunity to participate in a mass planetary ascension without taking recourse to a life of renunciation.

How do we know about Ascension?

All that we know about planetary ascension comes from two main sources. The first is from modern, terrestrial saints and scholars, and the second is from otherworldly sources through a process called channeling. We will examine the first source in part 1 of this article and look at otherworldly sources in part 2.

Let us look at a few examples of saints and sages who have spoken about this time of planetary ascension. Sri Sri Yukteswar Giri was perhaps one of the most authoritative personages who advocated planetary ascension. In his seminal book, The Holy Science, he attributed ascension to the natural cycle of the ages, which follows an astronomical phenomena known as the precession of the equinoxes.

In this model, the axial tilt of the earth revolves at a rate of approximately 1 revolution every 24,000 years*. During this time there is a variation in the amount of cosmic radiation coming to earth from the centre of the galaxy. This cosmic radiation has profound effects upon the mind and consciousness of all life on earth.

Following this model, there are thus a period of four ages, called yugas, that mankind lives through. These are modelled in the diagram below. 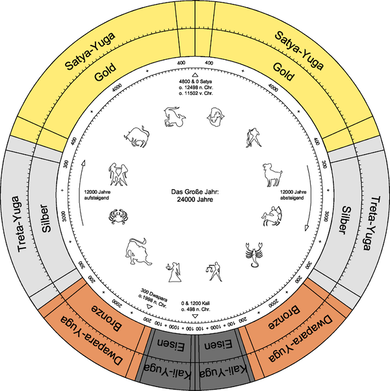 The top of the diagram shows the period of time when cosmic radiation is at its maximum. This gives rise to the Satya Yuga, or golden age. As the axial revolution of the earth proceeds the amount of cosmic radiation gradually diminishes culminating in the dark ages, or the Kali Yuga, at its nadir.

​According to Sri Sri Yukteshwar Giri’s calculations, the Kali Yuga is already finished and we are now in a ‘transitional age’ within an ascending arc back to the Satya Yuga or golden age. Several other notable saints and scholars have also asserted that we are now living through a great shift in the ages. Some of these include Sadguru Sivaya Subramuniyaswami, Dr. N. S. Rajaram, and Dr. David Frawley.

Consider for example a statement by Dr. Frawley,

“An important cosmic event is occurring now. The winter solstice is now at the point of conjunction with the Galactic Centre. There is some doubt as to the exact location of this point. I would replace it at 6° 40′ Sagittarius, or the middle of the Nakshatra Mula. Depending upon the ayanamsha one uses, this conjunction may be occurring either right now, or in the next few decades. The same event appears mirrored in the calendric calculations of the Maya, a culture that shared many practices with the Vedic people.

This indicates a harmonisation of humanity with the Divine Will as transmitted from the galactic center. The new spiritual thinking of today may be a result of this attunement process, which insists that we enter into a new ascending age of light and cast off the shadows of the dark ages of strife and dissension. Though some global shock and suffering must be endured, the outcome can only be ultimately for the good.

We should have faith in the Divine Will behind this process and not give in to the despair that the present state of the world must evoke in us. Though we may not be quickly ushered into an Age of Enlightenment, much positive growth will occur. A shift in history as significant as any to date will be experienced, with a movement from darkness to light and a new seeking of consciousness.” (1)

Some of the other evidence that these distinguished individuals have produced in support of their claim are documented in my article The End of The Dark Age.

It is important to note here that other than saints and scholars, several ancient cultures knew of the grand cycle of 26,000 years. Perhaps the most famous of these are the  Mayans who knew of the end of this age and encoded it in their long-count calendar. The date that their major cycle of the ages ended was December 21, 2012.

Concluded in Ascension: How Do We Know? Part 2/2.

Footnotes
* This motion is variable and modern astronomy places this cycle to be approximately 25,000 – 26,000 years in length.
References